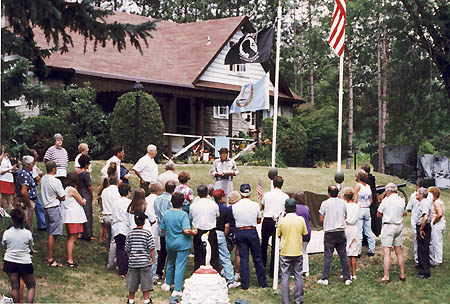 On August 3, 1997 at 2 PM Joe Naglich, former member of the 45th Infantry Division, 179th Infantry Regiment, unveiled a self-erected local monument to the American soldiers who fought and died in Korea. 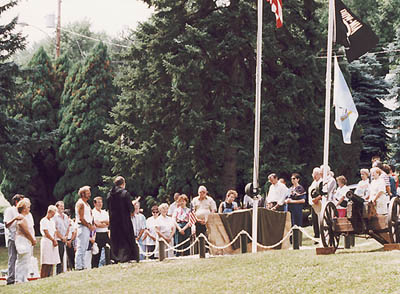 White marble stones are laid out in roughly the shape of the beleagured peninsula to represent the land they fought on. The border of spent artillery shells reminds us of the the fact that more rounds of artillery were fired in this war than in all of World War II. The white chain represents the 7,140 POWs and 8,177 MIAs that were held captive in Korea. Two gravemarker flags represent the over 40,000 Americans who died there. Two flagpoles bearing Korean era G.I. helmets hold the American flag, the POW/MIA flag, and the Korean War Memorial flag.

The stone is engraved with the beginning and ending dates of the Korean War along with the outline of the country and a line depicting the Demilitarized Zone, or the 38th parallel, which was established by the 1953 armstice that formally ended the war and separated Korea into North and South. 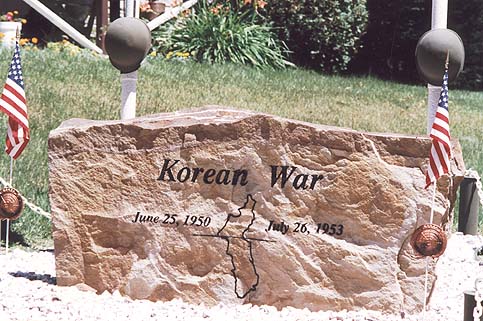 Mr. Naglich refreshed everyone's memory to the cost and magnitude of the three year long conflict. In conclusion, he said, "I know that God has a special place in Heaven for these forgotten heroes. I know - I was there."